“From Ephrata to Three Star General” officially opened to the public on Memorial Day weekend and has already drawn much interest from the community. In celebration of this new exhibit, the HSCV will be hosting a public grand opening reception on Saturday, July 16, from 10:am-2:00pm. General Blanck has graciously accepted an offer to attend and will greet visitors and speak briefly on his experiences.

General Blanck is a doctor of osteopathic medicine, served in Vietnam, is past commander of Walter Reed Army Medical Center, and was the 39th Surgeon General of the United States Army, to name just a few of his many accomplishments.

The exhibit features a large collection of personal items belonging to the General, from his 1959 Ephrata High School diploma to his full-dress uniform. Also on display are many photographs of General Blanck meeting world dignitaries and Presidents of the United States, as well as his many awards, honors and medals.

The exhibit, housed in the Theodore R. Sprecher Museum in the Connell Mansion, is open every Saturday, March through December, 10:00am-2:00pm; other times by appointment. Groups are welcome and admission is always free. 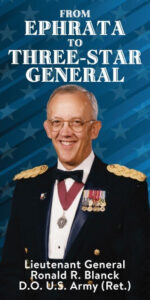